The Women Chemists Dinner is on!

It’s October; there must be a NCW 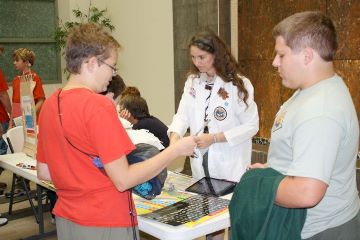 Lisa Balbes mans the registration table as scouts process through 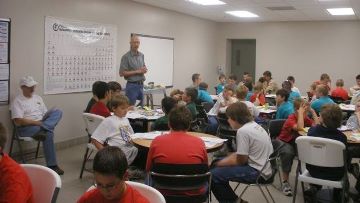 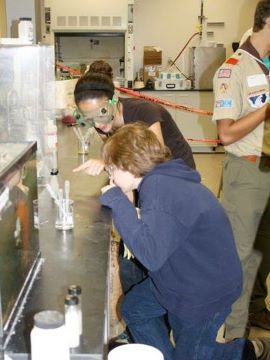 SLU Chemistry Club member helps a scout get oil and water to mix. 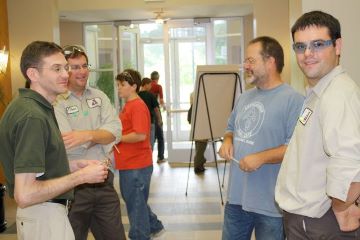 Jost Chemical employees Eric Bruton, Steve Ederle and Chris Ploesser take a break and talk to a parent while scouts are eating lunch.

The scouts participated in an introduction to the four classical fields of chemistry by Steven Buckner, professor of chemistry at St Louis University; and a safety presentation by Chris Ploesser, Jost Chemical. Then then rotated through four 45-minute stations (each run by two professional chemists), during which they made a cartesian diver, learned about separations, MSDSs, abrasives, emulsions and mixtures, and took a tour of a working chemical manufacturing plant. During lunch, the boys took part in interactive demos led by the SLU chemistry club and met individually with approved merit badge counselors. All 45 scouts earned their merit badges by the end of the 6-hour session. One of the scout troops, which sent 12 scouts to the clinic, showed their appreciation by presenting organizer Lisa Balbes with a fabulous floral arrangement.

Kids these days! You never know for sure what they think about anything. But these scouts turned that bit of wisdom on its ear. Here’s a selection of comments received by Lisa Balbes, the organizer of the event:

We have recently learned that two of our St Louis high school chemistry teachers of the year have gone on to bigger and better accolades.

Eric Knispel, the current section winner, teaches at John Burroughs School. He has been recognized as the Midwest Regional high school chemistry teacher-of-the-year. That’s a singular honor in itself, but it also qualifies Eric as our regional nominee to be national ACS James Bryant Conant teaching awardee.

Robert Becker, of Kirkwood High School, won the St Louis Section high school chemistry teacher-of-the-year award in 1995 and went on to win both the Midwest Regional award and the national James Bryant Conant award. He has now been recognized as the Missouri teacher-of-the-year. That’s not just high school, but all levels; not just chemistry, but all subjects!

We are delighted to acknowledge these outstanding teachers and grateful to have them here teaching the next generation of chemists and citizens.

Is there another HSCTotY out there?

While exemplifying excellence in teaching chemistry at the high school level, the nominee also should have contributed to other aspects of teaching, such as professional growth, curriculum development, course materials preparation, workshop participation, chemical or educational research, publications and other activities. Candidates must work within the geographic region of the St Louis Section–ACS and may not not be a past winner of the award.

Please contact Virginia Kirwin to obtain nomination forms and to verify eligibility: vkirwin@att.net or 636.225.5513. Nominations are due by November 24.

Section to elect officers for 2011

Welcome to the historic, first-ever, all-electronic election of the St Louis local ACS section. Every vote-eligible member with an email address on file will receive a personalized message no later than October 10—and likely much sooner. The link in your email gives you access to the voting platform and assures that we receive ballots only from eligible voters, and only one each.

If you have not received your voter email by October 10, please let us know at election@stlacs.org. Please provide your full name, email address, and (if not too much trouble), your member number from a recent issue of C&E News.

Everyone will have until October 31 to cast their ballots. Please vote! Even though most positions are uncontested, casting a vote is a great way to tell the members who work so hard on section business that you care about what they do. You will be able to access the candidate biographies during the voting process.

Alternate Councilors (vote for up to two)

Saint Louis Section activities include: chair succession (2004–06; Best Local Section 2005, large category); hosted ACS president Bill Carroll on whirlwind tour and chemical round table; the development and promotion of Kids & Chemistry since its inception in 1996; Science Fair Judge for the past several years; liaison for TIE (Teachers Industry and Environment), SAS (Society for Applied Spectroscopy), and AIChE (American Institute of Chemical Engineers). More recently involved in fundraising activities for the Section through the American Chemistry Council (November 2002–present) and nominations committee. He has been the treasurer of the St Louis Section (2007-2010).

Directors (vote for up to three)

Women Chemists Dinner .. Please Join Us ... All are Welcome! 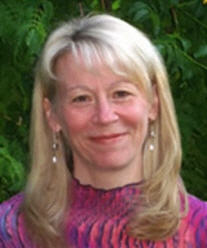 Dr Geraldine Richmond, from the Department of Chemistry, University of Oregon, will be in St Louis to deliver the keynote address at the annual Women Chemists Committee dinner.

Richmond is founder and chair of CoACh, the Committee for the Advancement of Women Chemists. Her talk is titled, Career Advancement Tips & Techniques: What They Left out of the Lab Manual.

Save the date: November 15, 2010, 6–8 pm, in Busch Student Center at St Louis University. RSVP to Leah O’Brien, lobrien@siue.edu. Cost is $10, payable at the door. That includes the meal, the program, and lots of camaraderie. Sponsored by the Women Chemists Committee, St Louis Section–ACS.

National Chemistry Week Events
October 17–23 ... Behind the Scenes with Chemistry

“Behind the Scenes with Chemistry,” this year’s theme for National Chemistry Week, celebrates finding chemistry in unexpected places.

So far, we know about the following events in and around NCW. If you know of any other elemental festivities and you would like them immortalized on the Section website, please email webmaster@stlacs.org and gwall37@msn.com.

Mole Day: at 6:02 on October 23. Controversy swirls around AM or PM; we prefer to let you decide. This event is actually Mole Minute, but you can celebrate—any way you feel is appropriate—all day long. One appropriate activity is to pause and recognize the 140th birthday of Dmitri Mendeleev’s periodic table, every chemist’s favorite poster art.

This year’s Industry Expo fits nicely between your morning and evening Mole Day celebrations: October 23, 10am–4pm. Saint Louis Science Center at the Dinosaur Overlook. For holding an event, to reserve your spot as an academic or industrial participant, or just to volunteer, contact Greg Wall at 314.435.6487 or gwall37@msn.com. 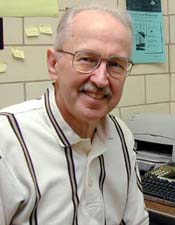 If you want to attend for dinner, please contact Shelley Minteer, phone 314-977-3624 or email minteers@slu.edu at least a week in advance. Usual cost of the dinner is $20 ($10 for post-docs and unemployed members). Members wishing to become active in section activities are welcomed for their first dinner as guests of the section.

Seminars are in McMillen 311 at 4 pm unless otherwise noted. For information, contact: Liviu Mirica, mirica@wustl.edu.