Banquet season: come to one or all

Battle of the Burets results

Science Fairs down to the wire for volunteers

Nominate for an award

As we solicit nominations for our flagship awards (below), we enjoy the fruits of last year’s nominations and honor some winners.

Recognition Night: On the Town with ACS

Please join us in the clubhouse at Glen Echo Country Club on Saturday, March 13th, to celebrate and honor members who have helped make this section great. The Distinguished Service Award will be presented, new 50- and 60-year members will be honored, and Bill Doub will give the traditional Past Chair’s address. There will also be plenty of time for schmoozing, seeing old friends, and meeting new ones.

To reserve your place(s) at this grand event, please return the reservation form by March 6th.

Please send reservations by March 6 to:

Awards Night: The dinner with a slew of honorees

Join us on April 19 in honoring the winners of:

Battle of the Burets winners and ... more winners 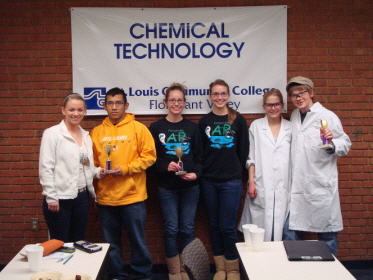 On Thursday February 25th, 21 teams from 11 local high schools gathered to participate in the Battle of the Burets competition sponsored by the St Louis Section of the American Chemical Society and St Louis Community College–Florissant Valley.

Teams of two students were judged on their ability to accurately determine the normality of an unknown acid solution in six minutes. The top team from each of three preliminary rounds advanced to a winner-take-all championship round. Both Pattonville entries and a single team from Clayton topped their divisions and advanced to the finals. The Clayton team of Meredith Redick and Ian Miller took top honors. 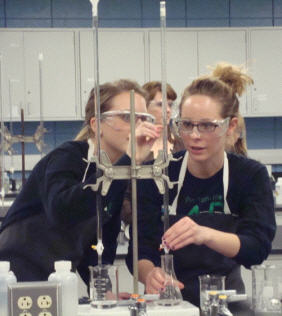 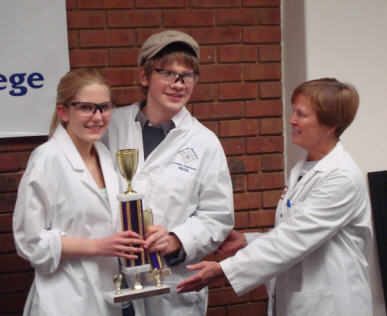 ACS Short Courses in our backyard

For the first time ever, ACS will be offering a selection of short courses right here in Saint Louis. The courses, all scheduled for the second half of April, will be held in the Eric Newman Education Center at Washington University Medical Center.

Here’s what available, with links to full course descriptions:

And here’s where to register for Saint Louis Short Courses.

Will you be a judge for the St Louis Section’s Science Fair awards? Volunteer for one or both of these opportunities by contacting Sheryl J Loux at 636-237-5149 or email sjloux@gmail.com.

Your participation as a judge would be greatly appreciated!

Our Section’s two premier awards, the St Louis Award and the Midwest Award, are conferred in separate ceremonies in October, but the run-up begins now, with calls for nominations. Surely you know some real winners! Check out the eligibility criteria, and make your feelings known. We’d like to have two great pools of nominees to consider this year, like we did in 2009, and we can’ do it without you.

At the time of the nomination, nominees must not have previously received the Midwest Award or any national ACS-sponsored award. Nominees must be members or affiliates of the St Louis Section of the ACS. Nomination packets received by March 31 are considered for award presented in October.

Nominations can be sent at any time to:

Nominations should include a nominating letter, two or more seconding letters from individuals who have had a close professional affiliation with the nominee, a brief biography, a description of the nominee’s accomplishments, and a list of publications and patents. Additional details, including a list of previous winners, and citations for recent winners, can be found at www.stlacs.org/events/stlouisaward.html.

As the Midwest Award Chair for the St Louis Section of the American Chemical Society, I solicit your assistance in identifying candidates for the 2010 Midwest Award. The St Louis Section of the ACS established the ACS Midwest Award in 1944 to recognize outstanding achievements in chemistry in the Midwest region. The award is conferred annually on a scientist who has made meritorious contributions to the advancement of pure or applied chemistry, chemical education, and the profession of chemistry. These contributions must have been made during a period of residence in the geographical area defined by the territories of the Local Sections that participate in the Midwest Regional Meeting of the ACS. Nominees can be from industry, academia, government, or private practice, and need not be members of the ACS.

Nominations should include a nominating letter, two or more seconding letters, a curriculum vitae, a brief biography, documented and objective information regarding the outstanding achievements of the nominee, and if the nominee is an academician, a list of persons who have received advanced degrees under her or his direction. Please submit nine copies of all nomination materials to me at the address given below. All nomination materials must be received on or before the deadline of March 31, 2010. Additional details, including a list of previous winners, and citations for recent winners, can be found at www.stlacs.org/events/midwestaward.html.

If you have any questions, please contact me at obrien@jinx.umsl.edu. Thank you for your assistance.

The competition consists of presentations based on the undergraduate research projects of senior chemistry majors at Saint Louis University. The candidates, chosen by the faculty, will each make a 15-minute presentation.

The winner of the award is determined by vote of the professional chemists in the audience. All ACS members are invited to attend and are eligible to vote. Baer-Fuller Hall is one of the underground lecture halls behind Busch Center at the intersection of Grand and Lindell Boulevards. Refreshments will be available after the competition. For further information, contact Bruce Kowert at 314-977-2837 or kowertba@slu.edu.

We have an event scheduled at the Saint Louis Science Center’s May Exhibition Hall for “Chemists Celebrate Earth Day”. All we know right now is ... it’s April 24th, and Greg Wall is working on the particulars. If you’re interested in more information or in helping out, that’s gwall37@msn.com.

The 6th Annual Member Picnic is set for Saturday, June 19, from 12 noon to 5 pm. The location is the Windegger Shelter at Tilles Park in Ladue.

Bring the family! Just $5 per person. Kids under 12 free. Please reserve by June 14th so we can plan for food and drink, and crowd control. More details and reminders as the date approaches. In the meantime, questions and reservations to:

If you want to attend for dinner, please contact Shelley Minteer, phone 314-977-3624 or email minteers@slu.edu at least a week in advance. Usual cost of the dinner is $20 ($10 for post-docs and unemployed members). Members wishing to become active in section activities are welcomed for their first dinner as guests of the section.

Seminars are in McMillen 311 at 4 pm unless otherwise noted. For information, contact Lev Gelb, gelb@wustl.edu.