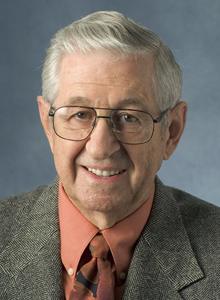 Daryle H Busch was born in the small town of Carterville, IL, population 2800. Upon graduation from high school in 1946, he enlisted and served in the US Army for about 2 years, most of the time as chief clerk for the Surgeon General, Far East Command, in MacArthur’s headquarters in Tokyo. After his honorable discharge, he attended Southern Illinois University, graduating after just three years. He then attended graduate school at the University of Illinois, where he worked with John C Bailar, Jr, one of the true pioneers of inorganic chemistry. He received the M S degree in 1952 and Ph D in 1954. While a graduate student, he edited a volume of Inorganic Synthesis and J C Bailar, Jr’s monograph, Chemistry of the Coordination Compounds. Busch’s independent career began in 1954 as an Assistant Professor at The Ohio State University, where he rose to Presidential Professor in 1987. In 1988, he relocated to the University of Kansas as the Roy A Roberts Distinguished Professor of Chemistry, a position he still holds.

Daryle Busch’s research transcends basic transition-metal coordination chemistry. He is considered by many as the father of macrocyclic ligand chemistry, which sprung from his concept of molecular template effects in the mid-1950s. He was a founder of the subject of ligand reactions and an early researcher and proponent of bioinorganic chemistry. In 1970, he first described the phenomenon labeled by others as preorganization. In Kansas, Professor Busch not only expanded on his early seminal contributions to macrocyclic chemistry but also shed light on complex molecular interactions. He has shown that molecular organization (or as he puts it,intermolecular organization) is able to “knit and weave” molecular fabrics from molecules, chelates and cages. He also continues to make contributions to industrial fields, as exemplified by his work using different condensed media for reactions that can ultimately have practical purposes. In that regard, he currently serves as Deputy Director of the National Science Foundation, Engineering Research Center for Environmentally Beneficial Catalysis.

His contributions continue to accumulate through all facets of science, including education and leadership. Professor Busch has made major contributions to university education, having taught thousands of undergraduates; guided over 200 Ph D and postdoctoral researchers; written three textbooks and numerous book chapters, articles, and reviews, for a total of well over 400 publications and over a dozen patents. His leadership is exemplified by his serving as President of the American Chemical Society in 2000 and on the Board of Directors from 1999 through 2001. He also led the Commission on Nomenclature of Inorganic Chemistry and served as Secretary of the Inorganic Division of the International Union of Pure and Applied Chemistry, and as Chair of the Chemistry Division of the American Association for the Advancement of Science. While ACS president, Daryle brought the Green Chemistry Institute into the ACS and oversaw the establishment of the rules by which it operates. During his career he has served as consultant to a number of industrial companies, including Dupont, Monsanto, 3M, Air Products and Chemicals, and Procter & Gamble.

In summary, Daryle has made many seminal contributions to a basic understanding of chemical reactivity, in education, and in leadership. His research spans the fields of homogeneous catalysis, bioinorganic and supramolecular chemistry, as well environmentally benign catalysis. Professor Daryle H Busch is truly an eminent scholar.