We have a 2015 Chemical Science & Technology winner 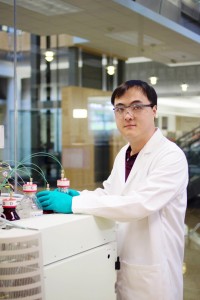 David Rhee, research scientist at Sigma-Aldrich, is the winner of the 2015 Chemical Science & Technology Award. The award will be presented officially at Recognition Night, March 7. Refreshingly, David has chosen to tell us a little about himself (lightly edited):

I graduated in 2004 from Hanyang University in Republic of Korea with a Master of Science in Analytical Chemistry. During the M.Sc. program, I had an opportunity to study as an exchange research graduate student in Professor Rachel Klevit’s lab at the University of Washington, where I first began to think that I would like to pursue my scientific career studying/researching in United States.

After graduation, I moved to United States and started working as a Research Technician in Professor Stephen Kron’s lab at University of Chicago, where I was developing photocleavable peptide hydrogel arrays for MALDI-TOF analysis to study kinase activity. In 2007, I started my industrial career as a Research Scientist at Sigma-Aldrich where I am currently involved in various projects developing reagents and tools for high-throughput proteomic analysis using mass spectrometry. In addition, I am also supporting other production departments throughout the company with QC analysis of raw materials and final products using various analytical techniques.

I’m currently living in Creve Coeur with my wife. We have been married for 3 years.

Join us in congratulating David Rhee for his nomination and his win.