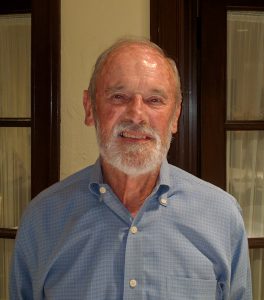 Born in England and obtained a BSc and PhD at University of Nottingham, followed by a post-doc at Washington University with David Gutsche. He joined Petrolite and spent 30 years in R & D starting as a bench chemist and ending up in senior management. His special interests were organic chemicals used as corrosion or scale inhibitors. These covered a range of chemical families with a special interest being in formation of C-P bonds. Some of the work was recognized in the award of Missouri Inventor of the Year in 1981 and later the St Louis Award.

With the closing of the Petrolite operation in St Louis, he embarked on a different career as a patent specialist with a start-up battery company in Tucson, Arizona. From there he retired.

Although having served in a couple of positions in the St Louis ACS section many years ago (Awards Chair, Organic Topical Group Chair), it was in Arizona that he became more active in local section activities. He first served as chair of the Southern Arizona Section and then 10 years as Treasurer. During this period, the section hosted a Regional meeting and he was part of the planning team and treasurer for that event.