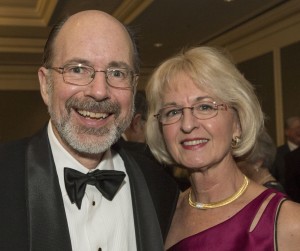 Joseph and Brenda Ackerman. Joe is in the 2015-2017 Chair Succession

Joseph J H Ackerman, PhD, is the William Greenleaf Eliot Professor, Department of Chemistry at Washington University in Saint Louis. Resident at WU for the past 35 years, Ackerman was Chair of Chemistry for 22 years. He holds joint appointments in the departments of Radiology and Internal Medicine of the WU School of Medicine, is Chief of the Biomedical Magnetic Resonance Laboratory at Mallinckrodt Institute of Radiology, and is Director of the Small-animal Cancer Imaging Core of the Alvin J Siteman Cancer Center.

Ackerman has trained and mentored numerous undergraduate, graduate, and postdoctoral students, many of whom now hold senior positions in academe and industry. In addition to having oversight responsibilities for a laboratory whose members range from full professor to high school summer student, his own research efforts are broadly directed toward the development and implementation of MR imaging and spectroscopy techniques to provide a more complete understanding of the complex microstructure and governing biophysical, physiologic, and metabolic determinants of cells, tissues, and organisms in the intact, functioning state.

On a personal note, Ackerman is married to a patient, understanding, and supportive wife, Brenda, whose warm sense of humor and superb cooking skills have served to create a much needed refuge from the increasingly frenetic world of academics. He is proud of his two children, Joe and Stephanie, who have real jobs and have moved out of the house.