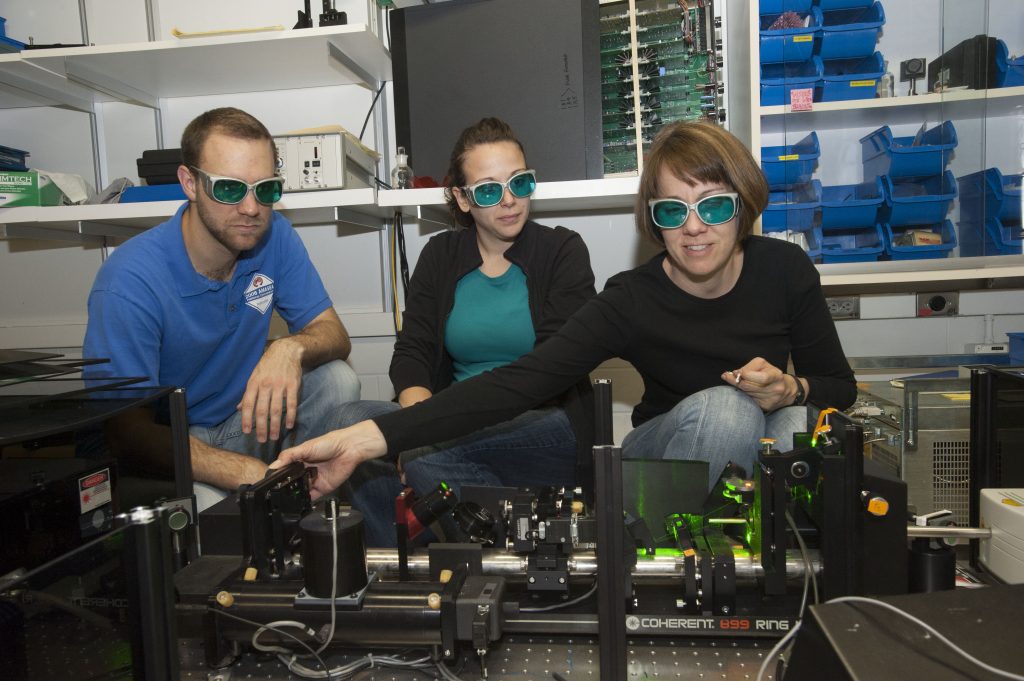 Sophia Hayes (right) with graduate students Dustin Wheeler (left), and Erika Sesti, who are teaching Sophia how to align a ring laser. Photo by David Kilper

Sophia Hayes is a professor of chemistry at Washington University in St. Louis, on the faculty since 2001. Dubbed a “chemicist” (in an accidental mis-translation by a German colleague), she spent time as a postdoc in Experimental Physics at Univ. of Dortmund (Germany) as an Alexander von Humboldt Fellow, a postdoc in Chemical Engineering (jointly at UC Berkeley and Lawrence Livermore National Lab), and was a graduate student in Chemistry at UCSB.

She and her group delight in NMR spectroscopy, but have brought lasers into the lab, too (because those visible photons are a lot easier to see!) Hayes and her group work on optically-pumped NMR of semiconductors and spin orientation, but also on solid-state NMR studies of the structure of non-crystalline thin metal-oxide films, mesoporous materials for capture of carbon dioxide, and the structure of minerals. They’re also developing a useful database of NMR tensors and spectra with The Materials Project – for users across academia, industry, and people simply interested in figuring out what’s going on with NMR beyond 13C and 1H.

After her undergraduate study at UC Berkeley in Chemistry, she developed an interest in technology transfer, especially for energy and environmental sectors (prior to grad school) working at a consulting company, RCG/Hagler, Bailly, Inc. in San Francisco as a research associate.