Chemists like a party as well as the next science nerd. We’ve been doing this summer picnic thing since 2005. 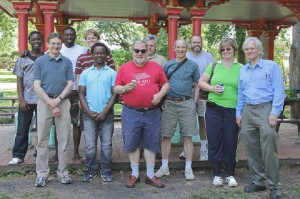 This is almost all the people who were still there when someone shouted, “Group photo!”

We float around the metro area, sometimes in the city (Tower Grove Park), sometimes in the county (Tilles Park). We always have a good time, with several spouses and often a variety of kids coming along to share the fun. Keep your eye on this page’s Latest News and the event calendar for announcements of this year’s picnic. We usually have the details set by February (ok, March, for sure), but you don’t have to commit until about a week before the big event. Come! We’ll remind you.

Latest News about the Section Picnic 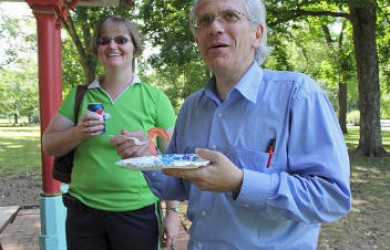 Comments are off
For the 7th annual St Louis Section picnic on June 18th, our venue returned to Tower Grove Park, where the picnic got its start six years ago. The day threatened a little rain, but didn’t deliver, and...
... more →
12345