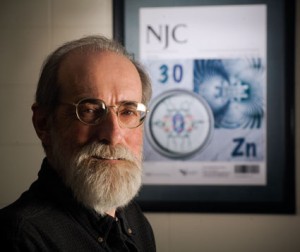 In 1994, he returned to his home state to head the Chemistry Department at the University of Missouri–Columbia and currently holds the rank of Curators’ Professor and Chair.

His discovery of liquid clathrates in 1969 led to fundamental contributions in aluminoxane chemistry and to the discovery of a method of stabilizing H3O+ in aromatic solutions. This work also provided the underpinnings of the current ionic liquid research.

The major themes of his recent work have involved the study of weak interactions and their use in synthesizing large molecular assemblies. In this arena, he first discovered organic clays, O–HÂ·Â·Â·Â·π hydrogen bonding involving water, the ordered water clusters, including (H2O)10, in a supramolecular environment, the selective binding of anions within the cavities of metallated calixarenes and related hosts, and a facile method of separating fullerenes by supramolecular complexation (with Prof. C L Raston).

In 1997, Prof Atwood published the discovery of a chiral spherical molecular capsule held together by 60 hydrogen bonds (with Prof L R MacGillivray). They quickly generalized this work to a strategy for the design of very large, spherical molecular capsules based on the geometrical principles of Plato and Archimedes. It is now possible to prepare such large supramolecular assemblies by design from simple molecular building blocks.

Another significant contribution was the description of control over supramolecular architecture, sphere or tubule, based on reagent stoichiometry. Thus, the same components may be formed into a sphere or a tubule by design.

In 2002, Prof Atwood (together with L J Barbour) published two studies in which a new view of porosity and the organic solid state are delineated. This work has been expanded in an Angewandte Chemie article published in 2004 (with Prof Barbour).

During his career, Atwood has authored or coauthored over 600 papers, patents, reviews, chapters, and books. Almost 100 of these papers appeared in the Journal of the American Chemical Society, and his work has appeared on the covers of both Science and Angewandte Chemie. Atwood also founded the Journal of Inclusion Phenomena and Supramolecular Chemistry. He is currently Associate Editor for Chemical Communications.