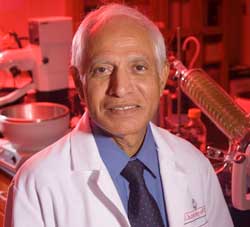 In a career that spans three decades at the University of Iowa, Vasu Nair and his coworkers have made seminal contributions in the synthetic organic chemistry of heterocyclic compounds, in particular the synthesis of nucleosides, nucleotides and their analogs. In recent years, Nair has put this expertise to good use by directing a program of synthesis and evaluation of inhibitors of the viral enzymes reverse transcriptase and integrase.

The Nair group has synthesized and evaluated dideoxynucleosides and -nucleotides that are potent inhibitors of HIV reverse transcriptase and that show clinical promise in the treatment of AIDS. They have been among the world leaders in the synthesis of compounds that potently inhibit another important HIV target, the integrase enzyme. This work1 is a notable achievement, as few groups have any success in inhibiting this enzyme. The potential is obvious for use of integrase inhibitors in combination therapies for combating HIV.