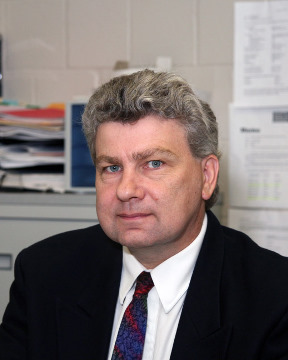 Dr Christopher D Spilling came to St Louis in August 1989 to join the faculty of the Chemistry Department at the University of Missouri–St Louis as Assistant Professor. Prior to that he spent three years as a postdoctoral fellow at Northwestern University with Professor Tony Barrett. At UM–St Louis, he was promoted to Associate Professor with tenure in 1996 and in 2001 to Full Professor. During the 1996-97 academic year he was a visiting scholar with Professor Steven V Ley at Cambridge University. Chris was the obvious choice for department chair in 2004 when the former chair, Gordon Anderson, left the University.

An Englishman, he was born in Norwich, East Anglia, and was educated at the University of Loughborough, where he received a BSc degree in chemistry in 1983 and a PhD degree in organic chemistry under the direction of Brian Marples in 1986.

At UM–St Louis, he developed a very productive, high quality research program. He has published about 70 articles, four patents, several chapters, reviews, etc. He has garnered substantial external funding for his research, both from granting agencies and industry, for the support of his graduate students and postdoctoral research associates. He has also presented his work many times at meetings and conferences and has given about 60 invited lectures at other universities. In 1991, the graduate students voted him the best teacher in the chemistry department. Chris has also been an active and contributing participant in the affairs of the St Louis Section of the American Chemical Society. He served as ACS Student Affiliates advisor in his early years at UM–St Louis and since 1994, he has served as the St Louis Section representative to the ACS Midwest Regional Steering Committee. He chaired the 2000 Midwest Regional Meeting in St Louis, a very successful one, and perhaps an important reason the St Louis Section won the Award for Outstanding Performance by a Large Section the following year.

Early in his career he developed a research program that had three foci: the use of phosphorus reagents for asymmetric synthesis, the chemistry of glucal halohydrins and the total synthesis of marine sponge metabolites. More recently his work has taken a more biological bent as the world-wide emphasis in organic chemistry moves in that direction. He and his students are now using their phosphorus chemistry to prepare biologically active molecules and testing them on cell lines and enzymes.

A relatively recent development in his research activity is in entrepreneurship. He has on several occasions consulted with local firms, but recently he and some colleagues founded the company Alkymos in order to fund some collaborative research. A consequence of that is that the University of Missouri System-Wide Faculty Entrepreneur of the Year Award for 2009 went to Professors Wes Harris and Chris Spilling for their work on removal of aluminum from infant feeding solutions. The award was established to honor a University of Missouri faculty member for a record of entrepreneurial innovation that demonstrates commercial utility, contributes to the public welfare, and brings visibility to the University of Missouri.

Chris lives in Bel-Nor with his wife Kathy and three sons Andrew, Robert, and William. He still plays soccer and racquetball and enjoys a beer on Friday evenings with his colleagues.