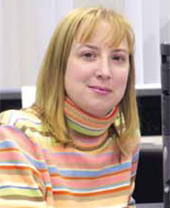 Dr Shelley D Minteer received her BS in Chemistry at Western Illinois University in 1995. She then went to University of Iowa to work on her PhD in Analytical Chemistry under the direction of Dr Johna Leddy. Her graduate work focused on magnetic field effects on electrochemical systems with specific emphasis on magnetically modified electrodes for enhanced electron transfer kinetics.

After graduating in 2000, she joined the faculty of the Department of Chemistry at Saint Louis University as an Assistant Professor. She later received a dual appointment in the Department of Biomedical Engineering. At Saint Louis University, her research program has focused on the development of enzyme immobilization membranes for increased stability of biosensor and biofuel cell electrodes, along with incorporating direct and mediated bioelectrocatalysis into anodes and cathodes. She has recently expanded this bioelectrocatalysis work beyond enzymes to mitochondria and is currently working on developing mitochondria-based biofuel cells and self-powered sensors. She co-founded Akermin, Inc with her former graduate student, Nick Akers, in 2003 to commercialize this technology.