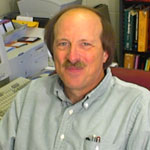 Wesley R Harris was born in Vero Beach, Florida, and raised near Wichita Falls, Texas. He attended Texas A&M University where he received both baccalaureate and doctoral degrees in chemistry. His training at Texas A&M was with the late Professor AE Martell.

Most of Wes’ work in recent years has centered on serum transferrin, the transport protein that carries ferric ion between sites of assimilation, storage, and utilization in animals. It is in this area of study that Dr Harris has developed his reputation and it was during the period he was at UC–Davis that he published the first of his many very substantial contributions in this area. An early paper, which appeared in Biochemistry, introduced a very careful measurement method that corrected data in the literature on the binding of transferrin to gallium. These data are relevant to the use of gallium radio-pharmaceuticals. Related work on transferrin chemistry, published when he was at UC–Davis, involved both kinetic and thermodynamic studies of iron removal from transferrin. Since his arrival at UM–St Louis, Dr Harris has continued his productive research program in bioinorganic chemistry.

Dr Harris is an expert in speciation and biodistribution of metals in humans and has developed excellent models to study this. His principal research contribution, however, continues to be the study of iron transport by serum transferrin and extensions to the transport of other metals in humans. Since the metals involved are toxic, the focus of the work relates to human health, and has been funded by the National Institutes of Health and companies involved in life science and biomedical areas.

His record includes almost 100 refereed publications, half of which were published since he came to St Louis. In addition to his research at UM–St Louis, he has been instrumental in developing the biochemistry emphasis area and designing the new degree programs in biochemistry and biotechnology. Wes, his wife Marion, and their son Jonathan live in Creve Coeur.