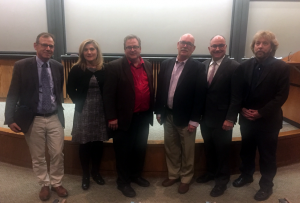 The 2018 Saint Louis Award Banquet in honor of Professor James Janetka of Washington University–St Louis, was held on Friday November 2, at the Glen Echo Country Club. There were over 50 people in attendance, including current and former postdoctoral associates of Dr Janetka and graduate and postdoctoral students from the Department of Chemistry, as well as faculty and staff from local universities and companies. The open bar that preceded the meal and proceedings, with candied bacon and veggie-stuffed mushroom caps, gave an opportunity for socializing and gossip. Two posters and a slide show promoting the Saint Louis Local ACS section were on display, the handiwork of past-Chair Natalie LaFranzo.

Section Chair-Elect Suzy Hartman started the evening by welcoming everyone and describing some of the recent activities and successes of the Section. She then acknowledged the honoree, Dr Janetka, and his wife Roseann Benson, a chemical engineer and science writer; the award symposium speakers; William Abraham from Monsanto; section officers; and her husband Greg. She also pointed out that there were nine former Saint Louis Award winners present, spanning 30 years, starting with Joe Ackerman who won the award in 1987 and ending with Keith Stine, the winner last year. Following the introductions, everyone partook of an excellent meal which included salad, tenderloin Oscar, and cherries jubilee. 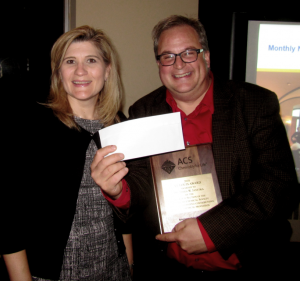 After the main course, Dr Hartman introduced Professor John Cooper, chair of the Department of Biochemistry and Biophysics of Washington University who gave a commendatory introduction to Dr Janetka. After receiving the plaque and honorarium, he gave a fascinating presentation on “Drugs: Fighting the Resistance″, describing his work on the design and synthesis of molecules to overcome drug-resistant bladder infections and cancer. These advances led to the formation of two companies, Fimbrion and ProteXase. Suzy Hartman then concluded the evening, which by all accounts, was enjoyed by all.