On October 1 of this year, a symposium and banquet were held in honor of Professor. Leah O’Brien, this year’s 51st annual St. Louis Section ACS Awardee, for her outstanding contributions to the profession of chemistry and demonstrated potential to further the advancement of the chemical profession. The symposium “Structure and Dynamics Via Spectroscopy: From the Microwave to the UV” organized by Dr. O’Brien was attended by over 42 people in the Science Building East Room 1136 lecture hall at Southern Illinois University at Edwardsville (SIUE) and by 48 people by Zoom.

Sophia Hayes, Professor of Chemistry at Washington University and the Past-Chair of the St. Louis Section of the ACS, welcomed the attendees and spoke of the significant contributions of the local section to the community. She then introduced Michael Shaw, Distinguished Professor of Chemistry, to serve as the symposium chair. Dr. Shaw spoke both to the great contributions Dr. O’Brien has made to understanding bonding and excited states of complicated molecules and her fostering of a welcoming and supportive environment for women in science. Dr. Shaw then introduced Dr. Michael Morse, Distinguished Professor at the University of Utah who spoke on “Predissociation Measurements of Bond Dissociation Energies”. Next, professor Stephen Cooke, Taina Chou Fellow, and MRSC at the State University of New York spoke on “The Surprising Structures and Dynamics of Some Fluorinated Organic Compounds.”

After a coffee break, Regents Professor Lucy Ziurys spoke on “The Notorious Transition Metal-Carbon Bond: What Rotational Spectroscopy Can Reveal.” The Awardee, Leah O’Brien, Distinguished Professor of Chemistry at SIUE, then gave her award address on “Spectroscopy on a Laser Beam – Detangling Perturbations in Complicated Molecules.” Each talk generated a lot of questions, and more were to follow, along with congratulations during the reception immediately following the symposium. 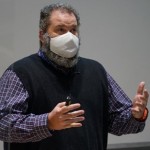 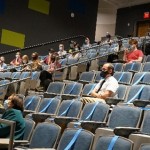