Another Salute to Excellence: delayed but not denied 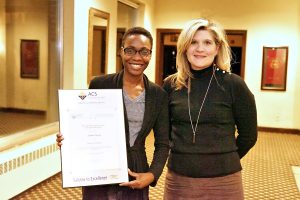 Cynthia Chapple receives her Salute to Excellence from Chair Suzy Hartmann at the January, 2019, board meeting

Our Section normally announces “Salutes to Excellence” at the Continuity Dinner. But this year … crickets.

For reasons your reporter has not been able to suss out, lauding excellence was not a feature of this past December’s Continuity Dinner. Well, it was, but in other categories (cough, cough — Jeff Cornelius and his Distinguished Service Award — cough, cough).

(A real newspaper reporter would say something like, “It is not clear why …”, completely passive-fying the lack of details. A pretend reporter just admits he has no idea.)

Anyway, we do have excellence to laud, and it’s happening here and now. Cynthia Chapple, the energetic leader of the Minority Affairs subcommittee, has caught the eye of the excellence-lauders for her single-handed efforts at restoring Minority Affairs as a dynamic and relevant service/activity of the Section. She is no longer single-handed, by the way, because she has also recruited a co-chair, one Chanté Summers, to share responsibilities, ideas, and future plaudits.

How’s that for burying the lede?

Update: the reason Salutes to Excellence were not announced at the Continuity Dinner is that the winners were not able to attend. There’s another one in the wings. Stay tuned.