Picking up some tidbits that had gotten lost in the virtual dustbin, we’re delighted to honor Donna Jo Malkmus as 2014 High School Chemistry Teacher-of-the-Year. 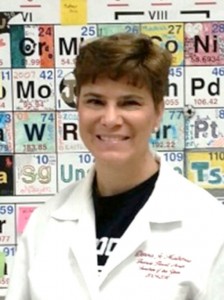 At Francis Howell North High School, she sponsors the science club which annually presents a chemistry “magic show” for 5th grade students at Henderson Elementary School. She is also sponsor of National Honor Society and is the treasurer of the Francis Howell Education Association. In her free time, she enjoys cheering on her alma mater, the University of Kentucky basketball team, as well as spending time with her husband and children, a son and identical twin daughters, who are all in college.