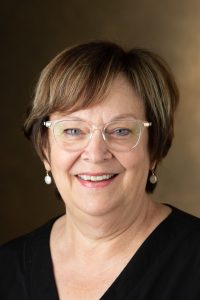 Leah Ellingboe attended St Olaf College (Northfield, MN), and graduated with a BA in Chemistry with Departmental Distinction in 1983, just one course shy in both Mathematics and Physics from a triple major. She participated in a semester at Oak Ridge National Laboratories, studying mixed sodium-lanthanide phosphates characterized by Raman spectroscopy. Encouraged by her academic adviser, she applied and was accepted to the graduate program at the University of Arizona.

Leah moved to Tucson in August, 1983, and joined the research group of 2nd-year Assistant Professor Peter Bernath – a choice that turned out to be exactly right. Leah studied high-resolution spectroscopy, learning laser excitation, dispersed fluorescence, and laser-induced fluorescence techniques based on a Coherent 699-29 ring dye laser. Her work focused on monovalent calcium and strontium diatomics, M+1L-1, with a metal-centered valance electron that could be used to probe the electronic structure of these molecules. Ligands ranged from hydroxide to larger alkoxides, as well as isocyanate and cyclopentadienide. The Bernath group used the 1-m Fourier transform spectrometer (FTS) associated with the National Solar Observatory at nearby Kitt Peak for emission studies where she was a frequent visitor during the final two years of her program. She graduated with her PhD in December, 1987, having defended a thesis titled, “Laser and Fourier Transform Spectroscopy of Gas Phase Molecules.” Leah won the prestigious Carl S. Marvel Award for Graduate Research in her 4th year at Arizona. She stayed an additional year in the Department as a post-doctoral scholar with Bernath and then as a Lecturer of Inorganic Chemistry in Fall 1988.

Leah met Jim O’Brien in Tucson, they married in 1986, and their first daughter, Christine, was born there in September, 1988.

The O’Briens moved to St Louis in January 1989. Leah accepted a post-doctoral staff fellow position at the US Food & Drug Administration, where she worked until August, 1990. Working with Dr Bill Doub, her research projects at the FDA focused on methods development for HPLC detection of p-chloro-m-xylenol (PCMX) and its major metabolites. She developed an in-line post-column enzyme reactor, wherein she bonded glucuronidase enzyme to column beads to construct the secondary column. A C-18 column would separate the PCMX, PCMX-glucuronide, and PCMX-sulfate metabolites, which flowed into the enzymatic column where metabolites were cleaved, leaving the free PCMX prime for electrochemical detection.

Leah joined the Chemistry Faculty at SIU–Edwardsville in August, 1990, with a research program proposing the spectroscopic study of late transition-metal diatomics such as CuO. Her lab at SIUE was a training ground for students to learn production methods in preparation for annual trips to the FTS at Kitt Peak. These trips were successful, with numerous publications, senior presentations, and masters’ theses.

A second daughter, Emily, arrived in July, 1992. In academic year 1997, Leah spent a sabbatical year at the University of British Columbia (Vancouver) and at UM-St Louis working in collaboration with Jim’s lab to combine his ultrasensitive Intracavity Laser Absorption spectrometer with her metal-containing gas-phase radicals. This was a huge success! Additional collaborations, funding, and equipment helped them expand their capabilities and contributions to molecular spectroscopy. Most importantly the O’Brien groups have been able to determine and understand the electronic structure of late transition metals bonded to various ligands and their excited states needed to test and guide the development of computational methods to predict the properties of new molecules and materials. Their contributions have provided fundamental insights into the nature of metal bonding involved in chemical synthesis and catalysis, as well as the structure and properties of the nucleus. Leah’s academic record now includes 70 peer-reviewed publications, 12 competitive grants from the NSF, 3 from ACS Petroleum Research Foundation, 1 from the Research Corporation for Scientific Advancement, and 1 from the Camille & Henry Dreyfus Foundation. She has mentored 40 undergraduate students and supervised 12 masters’ theses. She received the 2003 Paul Simon Outstanding Scholar Award (SIUE), the 2005 Vaughnie Lindsay Research Professor Award (SIUE), and the 2009 Distinguished Research Award/Promotion (SIUE). In 2012 she was honored as a Fellow of the American Chemical Society, and in 2015 she was elected Department Chair.

Leah’s contributions to professional service are many. She is a reviewer for several scientific journals and has served as ad hoc reviewer and review panel member for three divisions within the National Science Foundation (Chemistry, Engineering, and Human Resource Development). She is an active member of the St Louis Section–ACS, where she has served in several governance positions and founded the local Women Chemists Committee. Leah has been an advocate for women and underrepresented minorities in STEM within the Section, on campus at SIU–Edwardsville, and in the community. She was the General Chair of a successful ACS 2011 Joint Midwest-Great Lakes Regional Meeting. Leah received the 2013 Distinguished Service Award from the St Louis Section and the 2014 E Ann Nalley ACS Award for Volunteer Service from the Midwest Region.

The Saint Louis Section ACS Award that Leah now adds to her list of honors, originally sponsored by the Monsanto Company (now Bayer) and administered by the Saint Louis Section–ACS, is presented to an individual who has made outstanding contributions to the profession of chemistry and demonstrated potential to further the advancement of the chemical profession. The award, consisting of a $1,500 honorarium and a plaque, will be presented at the Saint Louis Award Banquet, which will follow an Award Symposium on Friday, October 1, 2021. For further details and updates please consult the St. Louis Section American Chemical Society website.