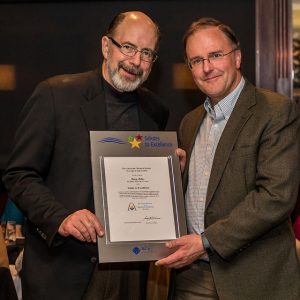 Henry Rohrs with his Salute to Excellence (and Joe Ackerman)

Attendees at the December, 2016, Continuity Dinner witnessed the conferring of two S2Es. A great year for Excellence, was 2016.

Here we cite Henry Rohrs for his leadership of the Mass Spectrometry Discussion Group, one of the most successful of our section’s discussion groups by any measure: activity, attendance, longevity, sponsorship. Henry keeps the ball rolling, and the parent ions flying in intricately described curvilinear paths, with about a dozen outside speakers every year, attended typically by 30-some MSists.

He is able to attract continuing sponsorships from ten to fifteen corporate partners as well as support from Washington University’s Mass Spec Resource (an NIH-sponsored center) and the Saint Louis Section–ACS.

When we say Excellence, we mean Excellence. However, we hope this recognition doesn’t signify to Henry, “I have reached the pinnacle of my career; it is time to retire.” On the contrary, we wish him many more years of fruitful Discussion Group discussions.