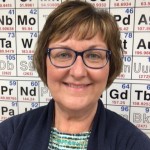 Carol teaches AP Chemistry and Pre-AP Chemistry at Fort Zumwalt North High School in O’Fallon, MO. She earned her Bachelor’s Degree in Chemistry at University of Missouri-Kansas City in 1988. While earning that degree, she began course work for teaching certification in hopes that someday she would fulfill her dream of becoming a teacher. Employment during college with both an agricultural chemistry lab and a pharmaceutical chemistry lab in the Kansas City area was rewarding and valuable work. After completion of her degree, her family moved to the Chicago area, where she worked in the soap industry and took some years off to raise her family. Later moving to the St. Louis area, she returned to the pharmaceutical industry. An opportunity to follow that early dream of becoming a teacher presented itself, so Carol went back to school to earn her Master’s Degree in Education from Lindenwood University.

Carol has been teaching for 16 years now, and is certain that her journey led to exactly the right place. During the past few years, she has implemented and works to continually improve her “flipped” classroom. Carol credits many of her best chemistry teaching practices and resources to workshops provided by the St. Louis Area Teachers ACS organization and Flinn Scientific workshops.

Carol and her husband enjoy time on their small farm in Saint Paul. Their three children have now all completed their college educations and live in the area. Their two-year old granddaughter has added a new and incredibly beautiful dimension to their lives.