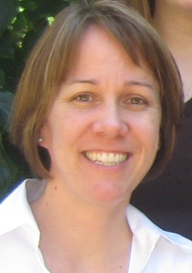 Sophia Hayes is Professor of Chemistry at Washington University in St Louis. Her BS is from UC Berkeley in Chemistry. She spent three years in energy and environmental management consulting at RCG/Hagler, Bailly, Inc in San Francisco, CA, before she earned a PhD in Chemistry from UC–Santa Barbara (1999), on a five-year fellowship from Sandia National Lab. At Santa Barbara she worked with Hellmut Eckert on solid-state NMR of lithium anode materials and amorphous carbon.

Dr Hayes was Directorate Postdoctoral Fellow at Lawrence Livermore National Laboratory (Materials Science) with Dr Glenn Fox working in collaboration at UC Berkeley (Chemical Engineering) with Professor Jeff Reimer, constructing an optically-pumped NMR apparatus and studying semiconductors and nanomaterials. She subsequently was named an Alexander von Humboldt Postdoctoral Fellow in Physics at University of Dortmund, Germany, performing optically detected NMR on semiconductors, in collaboration with Prof Dieter Suter.
Since 2001, Dr Hayes has been at Washington University, starting as an Assistant Professor and rising to full Professor in 2015. Her research efforts have been recognized with an NSF CAREER Award (2003), an Alfred P Sloan Foundation Fellowship (2007), and the Regitze R Vold Memorial Prize in solid-state NMR (2009).

Dr Hayes is married to Dr Christopher Hagedorn, a chemical engineer, business executive, and Washington University alumnus. They are the proud parents of a daughter, Marina, who has grown up attending NMR conferences, amongst a diverse community of scientists and engineers, who visit and stay with the family for research trips, to play team bocce, and Cranium matches.