STL Science & Technology has a winner 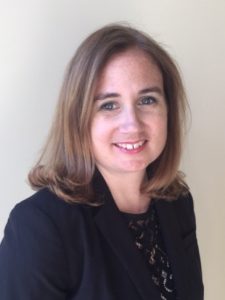 Alison graduated from the University of Manchester, UK, with a Masters in Chemistry with German. She began her research career at Pfizer in the UK working as a synthetic organic chemist in the Discovery Chemistry group, developing novel compounds for the treatment of stroke, thrombosis, and GI disease. Her family moved to St Louis as part of the Pfizer/ Pharmacia merger.

In addition to developing these low-volatility formulations, Alison has been instrumental in their scale-up and advancement to product commercialization. XtendiMax with VaporGrip™ Technology commercially launched in Canada in Spring, 2016, and was applied over dicamba-tolerant Roundup Ready 2 Xtend™ soybeans in the key soybean growing regions of southwest and eastern Ontario, and Quebec, as well as western Canada. In the United States, the use of dicamba herbicide over Roundup Ready 2 Xtend soybeans and Bollgard II Xtendflex cotton was approved in November 2016 for XtendiMax™ with VaporGrip™ Technology.

As part of the commercial launch, Alison has been involved with education outreach to key stakeholder groups both within Monsanto and outside of the company. These include Monsanto chemistry sales teams, academic summits, weed science society meetings and Commodity Classic.

Alison is a mentor with the Ag Productivity Innovations mentoring program and has presented at the ACS Chemistry Career Night. Alison resides in Wildwood, MO with her husband and two teenage boys, Thomas and Ben. She will receive her award at Recognition Night on March 25th.