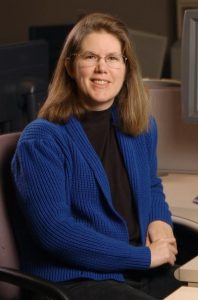 Dr Theresa Windus (Iowa State University) has been selected as the recipient of the 2022 Midwest Award. The St Louis Section established the ACS Midwest Award in 1944 to publicly recognize outstanding achievements in chemistry in the Midwest region. The award is conferred annually on a scientist who has made meritorious contributions to the advancement of pure or applied chemistry, chemical education, and the profession of chemistry. Dr Windus will officially receive the award at the Midwest Regional Meeting, October 19-21, in Iowa City.

Theresa L Windus is a Distinguished Professor of Chemistry at Iowa State University (ISU) and a Scientist with Ames Laboratory. She currently holds an ISU Liberal Arts and Sciences Dean’s Professorship. Theresa received her BA degrees in chemistry, mathematics and computer science from Minot State University. She then completed her PhD in physical chemistry at Iowa State University with Mark Gordon, where she focused on reactions of hypervalent silicon and phosphorus compounds as well as developing high-performance algorithms that were implemented in GAMESS.

Theresa examined relativistic effects and developed novel tensor methods in her postdoctoral years with John Pople and Mark Ratner at Northwestern University. She then held several positions at government labs including as the Director of Computational Chemistry/Training at the Wright-Patterson Air Force Base Major Shared Resource Center. At Pacific Northwest National Laboratory, she was the Technical Lead for the Molecular Science Software Group and the Visualization and User Services group in the Molecular Science Computing Facility, and led the development of NWChem.

In 2006, she left government lab research to join the faculty at ISU. Theresa develops new methods and algorithms for high-performance computational chemistry and applies those techniques to both basic and applied research. Her current application interests are rare earth and heavy element chemistry and transition metal catalysis. Much of Theresa’s research interests involve large, collaborative efforts between scientists in multiple fields working together to solve difficult scientific challenges.

She is currently the Deputy Director for the NSF-funded Molecular Sciences Software Institute and the Director for the DOE-funded NWChemEx Exascale computing project. She has served on several editorial/advisory boards including the Journal of Physical Chemistry A/B/C, the Journal of Computational Science Education, Parallel Computations, and the Extreme Science and Engineering Discovery Environment (XSEDE). Theresa is a Fellow of the American Association for the Advancement of Science (AAAS) and the American Chemical Society (ACS).

She is an active member of the American Chemical Society, organizing multiple symposia, representing the PHYS division as a Councilor, and serving on the Committee on Chemists with Disabilities, most recently co-editing the “Teaching Chemistry to Students with Disabilities” resource.

Theresa is actively involved in high-performance computing leadership including membership in the DOE Future of Laboratory Computing Working Group, co-chair for the Technical Papers for Supercomputing 2010, and cochair of the DOE Exascale Requirements Review for Basic Energy Sciences. Theresa has received multiple research and teaching awards including a Federal Laboratory Consortium for Technology Transfer Award for her work with NWChem.