A Banquet immediately followed the symposium and reception at SIUE at the Glen Echo Country Club. As last year’s banquet was canceled due to the pandemic, the section decided to honor both this year’s awardee and the previous year’s. Therefore, in addition to honoring Leah O’Brien, the 2021 St Louis Section ACS Awardee, the banquet also honored Professor Richard Loomis of the Chemistry Department at Washington University, the 2020 Awardee.

The banquet started with a cocktail hour with candied bacon, brie in phyllo, Caprese skewers, and Greek chicken skewers with lemon aioli hors d’oeuvres. Forty-nine local ACS section members and guests attended. Professor Sophia Hayes, past chair-elect of the St. Louis ACS Section, then called the attendees to dinner and introduced Professor Leah O’Brien and her husband, Professor Jim O’Brien, and guests. She then introduced Professor Richard Loomis and his wife, Toni Loomis, an administrative assistant for the Global Studies program at Washington University, and their guests. Prof. Hayes then thanked Prof. O’Brien and the speakers for putting on such a great symposium. Finally, she introduced elected members of the local section (seven in attendance) and former St. Louis Section ACS Award winners (nine in attendance).

Everyone was treated to a great dinner of a mixed green salad, Japanese cut sirloin, and Asian glazed salmon, with tiramisu for dessert. While people were enjoying their dessert, Prof. Hayes introduced Prof. Michael Shaw, who introduced Prof. O’Brien, after which Prof. Hayes presented her with the St. Louis Section Award plaque and a check for $1,500.

Prof. O’Brien then gave a provocative presentation titled “Warming the Department Climate to Retain Women Faculty.” In her talk, she made many suggestions about creating a more gender-friendly department environment to retain women faculty in Chemistry and other scientific disciplines. Specifically, the very successful Advocates and Allies program developed by Roger Green at North Dakota State University.

Following her talk, which generated many questions and discussions, Dr. Hayes introduced Prof. Bill Buhro, Chair of the Chemistry Department at Washington University, and Prof. Richard Loomis. After the presentation of the Award Plaque, Prof. Loomis gave a talk entitled “It is Easier to Fill Big Shoes when You are Surrounded with Good People.” The talk related his experiences in becoming interested in science and pursuing an academic career when surrounded by leaders in his field. His speech prompted a question from a woman graduate student about the imposter syndrome, which is a common problem for young scientists, especially women.

Dr. Hayes closed the proceedings thanking everyone for attending and the staff and chef of the Glen Echo Country for the fine service and food and wished everyone a safe trip home. A good time was enjoyed by all! 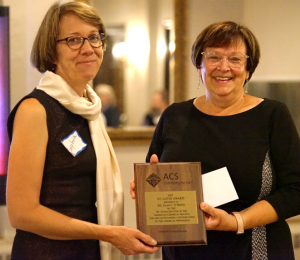 Leah O’Brien receiving the St. Louis Section ACS Award at the Banquet from Sophia Hayes, immediate past chair of the section 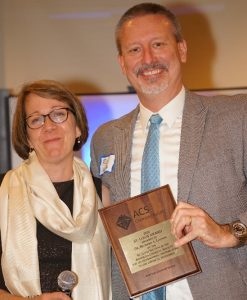 Richard Loomis receiving the St. Louis Section ACS Award at the Banquet from Sophia Hayes, immediate past chair of the section